Ploughshares: The round plough blade of the early modern bookbinder

This won’t be a full post because I’m still collecting information and wanted to share where I’m at.

Conservator and bookbinding historian Jeff Peachy refers to round planes as being drawn from the French/Swiss tradition. Many of the articles I’ve been able to find site the tradition more in the Swiss/Dutch/German tradition. Almost all agree that it differs from the English tradition, but not when or how the divergence happened.

The Round Plough by Tom Conroy, Abby Newsletter (reprinted with additions from Binders’ Guild Newsletter XI:5 (1988)

A Simple Bookbinder’s Laying Press and Plough, by Hugh Sparks. This maker’s machinist precision is a sight to behold. He includes a bit of a lead on an over-the-counter blade that he found on eBay as industrial surplus.

Bookbinding Plough User Instructions, Affordable Binding Equipment Company. Unfortunately, they refuse to sell just the blade unless you’ve bought one of their ploughs, which look sustantially different from the traditional screw-set variety I’m making. Caveat Emptor: I have no experience with their product nor do I know anyone who has one of these. This is just information as I don’t have enough information to make an endorsement (or not).

This is where we go back to my wife’s periodic question: “You know you can buy those, right?”

What about Fiskars Rotary cutting blades? In the comments on the last post, Wayne Robinson pointed out that Fiskars makes a rotary blade for papercutting that might hold some answers. Actually, I have a small Fiskars rotary paper cutter on my work table right now and the Engineer is a quilter, so she uses them with abandon for strip cutting quilt tops.

My only reticence comes from how brittle and thin they are. I’ve chipped at least two of my wife’s by running over a pin and I’m no longer allowed to play with her toys. Other concerns include the fact that they’re designed to cut while rolling (which might be irrelevant, but worth noting) and wondering at the chance of deflection when they hit the block of paper.

But I guess we’ll find all that out the hard way because it’s going to be my next stop on this journey.

Thanks to my tendency to ding my wife’s quilting blades, I have a couple to play with which no one will miss. I’m planning to knock togther a simple version of my press out of pine, screw a Fiskars rotary blade to the bottom, and… well… I guess if you’re a praying person, remember me in your prayers.

An almost comically-large round plough

I’m leaving you with this German monstrosity, circa 1699. It’s an engraving from Etwas für alle (Something for everyone) attributed to the Augustinian monk Abraham à Sancta Clara. I spent my lunch break today cleaning it up and using Photoshop to flatten the poor scan quality provided by Wikimedia commons. Look at the blade on that thing; it’s the size of a skillet! 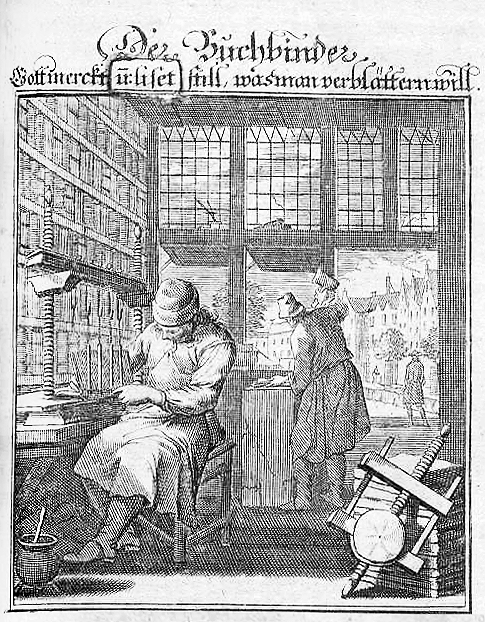 I don’t think we can say for certain what the blade shape was for our ploughman’s tool in the Jost Amman image, but I feel fairly certain that it’s tiny compared to this thing. That massive wheel would be visible in Amman’s woodcut if it had that… hubcap under the hood.