Yesterday I was discussing shoemaking with Josh, a young puppetmaker and friend. He was puzzling out some aspects of getting the boots right on a puppet he’s building and even though he was working with vinyl for a fuzzy puppet foot, a shoe is a shoe so I was sharing some tricks of leatherworking that I thought might translate well.

Every hobby/endeavor has a tool that professionals use as though it had been grafted to their hand at birth, but the home crafter ignores or under-uses. In the kitchen, it’s tongs, in woodworking, it’s the whetstone, and in the leatherworker’s studio, it’s a pair of dividers.

In the background of almost every shot of my workbench, you’ll probably see a pair of dividers somewhere. With our dividers we’ve laid out dovetails, transferred measurements from a pattern to cloth, scribed curves and circles for carving, marked off distances on charts, proportioned small-sketches to full-size patterns, made buckets and tankards, and… oh my. They are the silver bullet for spacing and proportion.

When I was talking to Josh, there are three uses that I thought they’d particularly help him with: stitch spacing, patterning, and seam allowances.

If you go to a leatherworking store, you will find a pile of tools to help you with these concerns. There are scribes that will carve a groove in the leather a set distance from the edge and little wheeled devices that will mark out set stitch distances. Likewise, there are a number of historical jigs and tools you can use for just such an occasion.

Most of the time, though, I just grab the dividers.

The following three methods allow your dividers (or if you don’t have a pair, you can use a school compass) to act as a bunch of tools without taking up a bunch of space in your toolbox. Note: If using a school compass, you’ll want to put some super glue or similar on the tip of the pencil to keep it from marking your leather.

Set the points at the distance from the edge you want your stitches to sit and use one point along the edge and the other as a scribe and your seam allowance is set.

If you’re using a school compass, place the pencil tip on the edge and used the sharp point to scribe the line in the leather. You can, theoretically, do it the opposite way, but the scribe will also help hide your stitches when you’re finished. 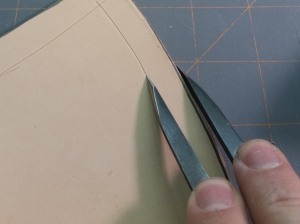 This is a bit different from marking your seam allowance on an existing pattern. When you’re making a pattern of an existing object such as an axe head or a sheath for a knife, you begin by tracing the object onto the back of the leather (or you can use a piece of paper). A sheath or axe mask must, of course, be wider than the piece it is protecting. Set your dividers to the desired size and seat one end on the traced line and drag it around the pattern, keeping square to the traced line. With a bit of practice, this will add a consistent-width seam allowance around anything you’re patterning. 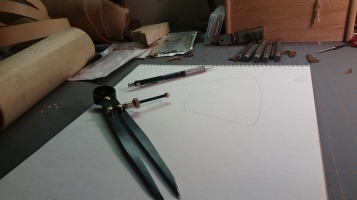 Set your points to the length of stitch you wish to use and “walk” the dividers along your stitch line. This is difficult if you have long dividers and a short 1/4 or 1/8 inch stitch length, but you can get there if you set the distance at twice your desired stitch length. Just make two passes, starting your second pass midpoint between the first two marks.

Or you can do it the modern way… 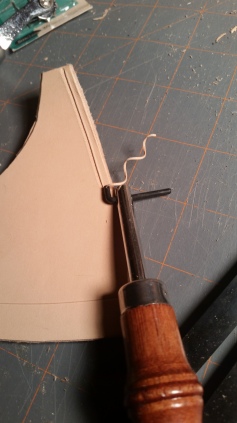 Something neat to read: