Sometimes, I run out of resources and the chronicles are silent, so I end up doing things by the seat of my pants on this project. Beer-brewing was not supposed to be one of them.

After, all I had a book!

What could possibly go wrong?

I read the instructions in my book. Over and over again. I visited the local home brew store. I talked to the very knowledgeable guy who was there. When I told him what I was up to, he didn’t bat an eye. Told me what to expect, gave me some advice, told me I didn’t need to buy any extra gear, and sent me on my way with ingredients in hand. I read three books on the history of beer and brewing.

Then I re-read the instructions and read two books about modern home brewing and made notes on a bunch of things I didn’t actually need to know, but wanted to know just in case I was wrong about what I’d need to know.

And then this happened.

Yes, it was going to be that sort of night.
My partner in crime Patrick has a partner in crime of his own, his wife JoNell. She was there to document the procedure for the edification and amusement of her friends on Facebook (and with her permission, you as well! Remember to thank her in comments.)
It was supposed to be simple (according to the instructions, which I really did read) for Patrick and I to put together a basic, low-alcohol, late medieval ale. It would “be like liquid bread,” the author assured us.
Deviations from Period Procedures:
Incidentally, when you’re around theater people, mention the idea of dressing in drag very carefully or you’ll end up in a dress before you can say “Milton Berle”.

Welcome to the Brewery of the Bearded Alewives.

Mistake #1: As previously noted, I forgot to bring the kitchen scale with us and the Franzes didn’t have one. As it turns out, you can weigh ingredients the way you weigh a cat: Weigh the person, weigh the person holding the cat/oats, subtract the difference. 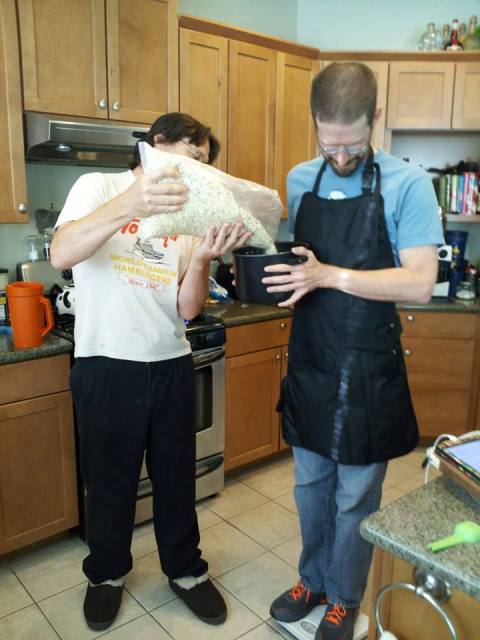 In all honesty, this probably had minimal impact on our results. The malt was pre-weighed by the home brew store, who also ground it for us.  We also tested our scale scheme with known-weight items like the bag of malt to be sure we could get into the correct ballpark for our weights and measures.
The oats were mostly present for flavor, so a slight deviation in weight probably didn’t affect the brew much anyway.
Why yes, I did watch a lot of MacGyver as a young and impressionable child, why do you ask?  Look, if you want to read about brewing being done right and done well, there are places to find that sort of thing. Sadly, this is not going to be one of them.
The recipe was simple:
4.5 lbs of Malt
1.5 lbs of Oats
4 gallons of water
2 packets Ale yeast
2 five-gallon food-grade buckets
End of list.  How could someone as experienced at cooking pretty much every cuisine as I am screw up a recipe that simple?
The careful observer will note that I even got to wear my own clothes! And a snazzy black Guinness apron.

And so the evening began.
There was a bit of tumult early on as we encountered cracked and broken buckets. Patrick has tried home brewing before, but it was quite awhile ago and some of his equipment has moved all over the country to sit unused in various ports of call. Not all of it fared well.
Eventually, we discounted the idea of using the floor cleaner bucket and settled on a 5-gallon water cooler and the one food-grade bucket that had survived the moves.

Mistake #2: This one might’ve been worse. The bucket substitution wouldn’t have been such a big deal, but the broken one was the only bucket with graduations marked on the side for gallons. We used a pitcher that was almost a half-gallon to measure out our universal solvent.

The whole procedure takes several hours, long stretches of time are called out in the recipe as each step requires the mash (which is the term referring to the mixture that is allegedly going to magically become beer at some point) be left alone to saturate, meld, boil, sit undisturbed, settle, etcetera.  All with the aim of extracting the sugars locked in the barley, which will feed the yeast, which will make alcohol with them.

Not to blame my tools but if I had one criticism for Dr. Cookson (Author of Drinkable History) it would be to better list out the steps in the process. As it is, the recipe/procedure is shot through with jokey asides while you scour the instructions for some indication of how much water should be boiling and when it should be added can get a bit lost in the silliness.
Rather like trying to cook from one of my blog posts, come to think of it.
Through the clever use of an array of kitchen timers, we were able to keep on-track with our boiling and stirring and pouring routine…

Well… mostly.
Did I mention that my TV is only tenuously hooked to the rest of the world? It’s been ages since I cut the cord, so any current television is a bit of a siren song. Honestly, between the television and the ghosts of alewives past, we probably never had a chance.

I ended up with a series of successive timers set to go off at specific intervals so that one would signal me to begin heating the water that I’d need to be boiling for the next step. I don’t know how alewives did this, but for me, it was all about timers.

Sometimes, it was difficult to figure out what was going on and I think I re-read the entire book several times, trying to suss out the instructions from the asides.

Then, he asked me if I’d sanitized the spoon… crap.
Should’ve used a broom.
Coming tomorrow in Part Two: We tangle with the Sickness Demons
– Scott