Kill It With Fire Part Two: Time to eat your beer…

I have to admit something before we begin… I’m not a baker. Bread is as near to kitchen magic as anything I’ve ever seen.  It’s something my mom did so easily yet seems to complex that it’s always freaked me out a bit even when the most complex kitchen procedures fell before my mighty spoon.

I own scores of books about breads and I aspire to being known as a baker, but I never actually bake anything.  It’s just so fiddly and I always have some other Thing that Needs My Attention Right Now. 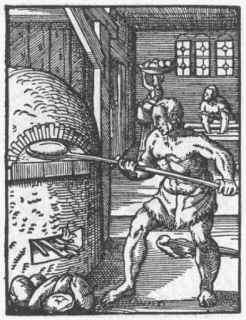 That changes today.  And because I can’t do anything normally, my first loaves of bread ever will be in a wood-fired oven made out of cat litter.

It was clean when I started, honest. But we’ll get to that in a minute.

You are, by now, familiar with that photo of the empty plinth in my back garden that I have posted a time or three in hopes that doing so will inspire me to put something there… preferably something oven-shaped.

My old nemesis Jost Amman was an enormous help this time around, with his picture of the half-naked baker at his work.  (Call me crazy; I decided to do this fully-clothed.) Bread ovens the world over are made in essentially the same way. A dome of clay mixed with sand and straw is formed, and when dried it is heated with a fire. This simple style was in use in Pompeii and was still in use in an essentially unchanged form in colonial America. Without driving more than an hour from here in any given direction, I can reach at least ten restaurants using the same technology as our ancestors did to bake pizzas. Some of them cheat and use gas to heat them, but there are a good many that still use wood.

Some technologies are just built to last.

The principle is simple. Clay is a natural heat sink, an insulator that stores heat that it pushed into it by a kiln or by a wood fire. This makes ceramics possible. It also makes it possible to use that “heat sink” property to cook food by adding heat and then using the stored heat after the source is removed, in this case a wood fire. 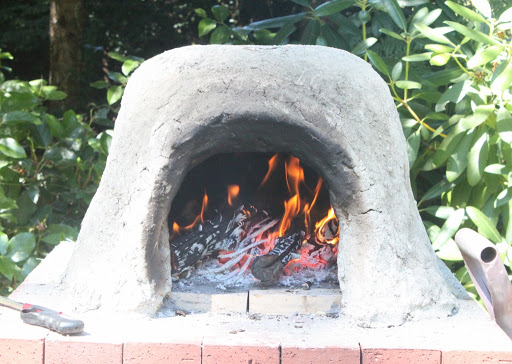 Apparently, the island where I live used to house the Pacific Northwest’s largest clay quarry. This should be a blessing since most of that clay went into the bricks that built Seattle. It’s not a blessing, though, because apparently they scooped it all out and carted it away, leaving me wanting for clay when it came time for building ovens.

The closest, cheapest, most readily-available source of clay? Cat litter. The stuff they sell in the bulk bins at my local pet store is almost pure clay and it’s less than ten bucks for thirty pounds if you have a coupon.

I used a book called Build Your Own Earth Oven by Kiko Denzer and this video from Jas Townsend that is based on the same book.

They have another video on their YouTube channel showing them building a quicky version using cat clay. Mine is a melange of both methods the base method in this video and the quicky version, all based on reading Denzer’s book.

It takes up to two hours to get it fully up to heat.  Which is handy since most breads need that much time to rise.

Eat your beer/Drink your bread

My sources don’t agree on whether or not soured dough was a Thing in Elizabethan bakeries. And those who say it was don’t cite their sources. I honestly thought it was, because it seems so obvious to me and I can find plenty of sources dating the procedure back to the ancient world. One thing I know for certain is that yeast was available for purchase from brewers, who scooped it from the foam that forms atop fermenting ales. The foam was called “Barm” (from Old English “beorma” meaning ‘yeast’, and the common root of the word “Barmy” meaning goofy… I just couldn’t make this stuff up if I tried.)

As it happens, I have a batch of fermenting ale… that isn’t very foamy.

Thankfully, I know how to cheat because the same wonderful folks who posted those bread oven building videos also posted some videos about using their ovens. (Honestly, their cooking videos are not to be missed.) And along the way, they gave some tips on how to fake ale barm using a bottle of modern ale, some ale yeast, and a bit of agitation.

I mixed mine in a mug. The guy at Jas Townsend mixed it up in a bottle, probably because it made for more interesting video footage.  Just remember to account for that flour and moisture in your recipe. 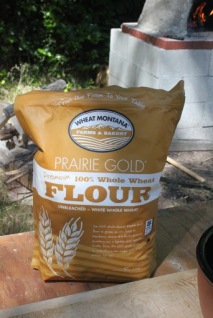 Bread recipes for the period are frightfully simple. Flour of various sorts, water, a bit of salt, and yeast. Most of the things we add to bread today to change crumb structure and density and whatnot are perishable and therefore seasonal for the Elizabethan baker. A professional bakery probably had better access to all ingredients, but for a loaf meant to be sold at the palace. Our bread is of the middling sort, so it will boast only one extra ingredient to suit my fancy: honey.

A confession the recipe I used as the basis for my first loaf was the Basic Whole Wheat Bread from the Laurel’s Kitchen Bread Book by Laurel Robertson, et al.  It’s a fantastic loaf of bread, dead simple, and she has a wood-fired oven in her home, all of which are points in her favor.

Also, it’s as close to the period recipes I have onhand as any other and I needed something basic to start me out. So thank you, Laurel and your kitchen.

I keeping with my imaginary middle-class loaf, I won’t be using white flour, which in the 16th century would be achieved by ‘bolting’, which is the act of filtering flour through increasingly finer cloth until all of the chaff and germ are out of it and only the endosperm remained. These days, we use chemical processes to whiten flour, so I don’t generally eat the stuff anyway.

Sit the water and honey atop the warming oven to dissolve the honey into the water while you scoop your dry ingredients into a large wooden workbowl.  Make a well in the center and add your warmed water/honey mixture and your barmy concoction.

Get your hands in there and start to bring it together into a dough. It will be sticky.

Turn it out onto a floured bread board and knead for up to twenty minutes or until the dough has absorbed all the flour it’s going to.

Split in twain and let rest under a towel in a warm spot under a rhododendron or apple tree (which is totally period, right?) and leave it alone for two hours.

Seriously. Leave it alone. Don’t even peek at it. Go put the kettle on and make yourself useful while the yeast do their thing. 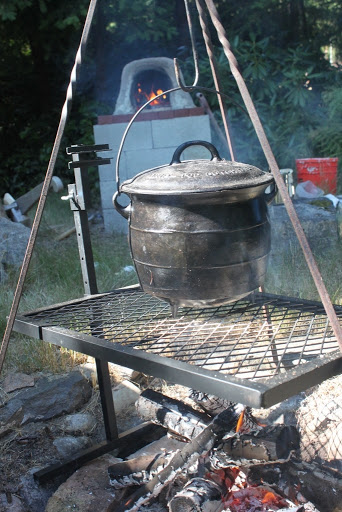 When the bread’s risen and the oven is heated up, it’s time to work quickly. No time for lollygagging or posing for pictures. Use a hoe or something to rake the coals out of the way and give the floor of the oven a good mopping with water.

Much sizzling will occur; that’s okay, it helps the bread form a goodly crust. Flour your peel and transfer your risen dough balls to the oven, quick like a bunny!  The longer the door is open, the more heat you lose! 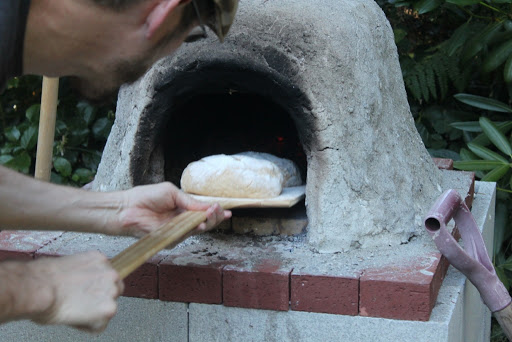 Take that door you made yesterday with the handle made from a re-purposed curtain rod holder (waste not, want not) and get it in place, sealing around the edges with a paste made from flour and water. 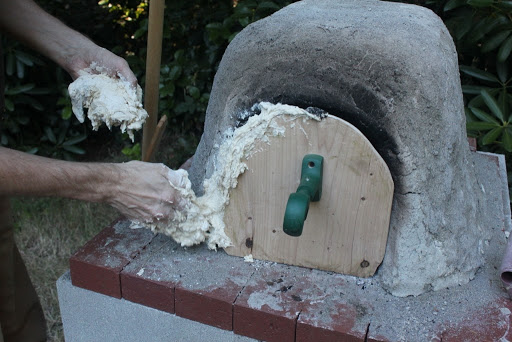 Wait twenty minutes. No peeking! Just let it bake.
When the cell phone timer goes off (or your perfectly-period hourglass… um… beeps) it’s time to remove the bread.  The paste caulking might still be gooey. That’s okay.

Pull them out and flip ’em over. When you knock on the bottom, it should sound firm, but a bit hollow. That means they’re done. I don’t know why, but it does and they didn’t have things like instant read thermometers and toothpicks to test these things. 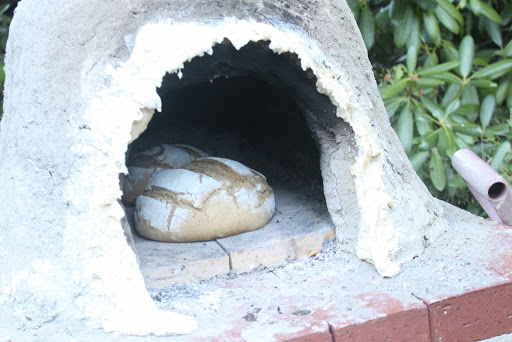 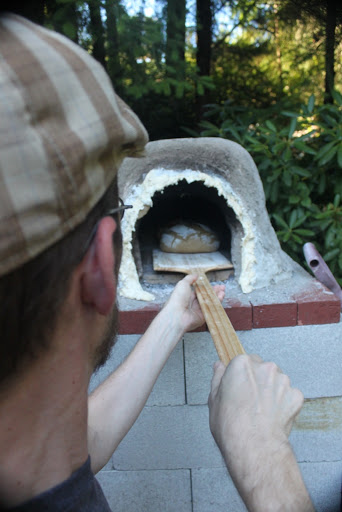 Note to self: The surface of a bread peel is not a high-friction surface. You almost dropped two loaves in the dirt because you were getting cute with it. Move slowly and don’t be barmy. 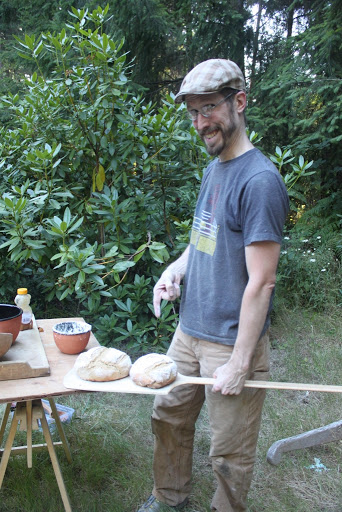 Find a bread knife and don’t cut yourself. Bloody bread is not good eats. 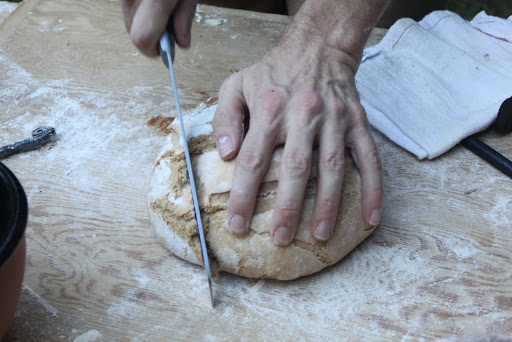 Smear with a goodly portion of butter and enjoy the taste of your fragrant, crusty, and just slightly chewy, beer. 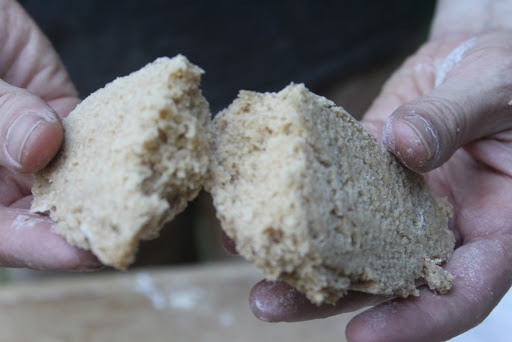