Today was supposed to be a work day for our kitchen remodel, but then the back gremlins showed up and now I stand at the new kitchen counter typing this because I cannot really sit. Probably twinged something when I moved the anvil off the kitchen counter so The Engineer could do some tiling next to the stove.

Yes really. Why, where do you keep your anvil?

Since I can’t really undertake anything new, let’s rejoin the Brewery of the Bearded Alewives, already in progress… 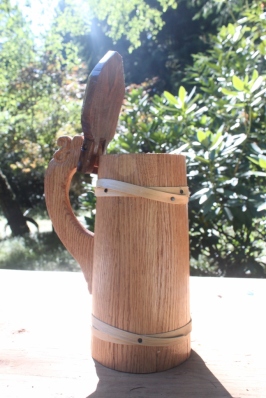 The Elizabethans were not as dirty as advertised. They bathed more often than frontier Americans (who I wager were also cleaner than reputed) and even brushed their teeth. Okay, they chewed on a sort of bushy stick, but it sort of amounted to the same thing. The Waterpik hadn’t been invented yet. Unfortunately, any benefit of this brushing was somewhat undercut by their affection for raw sugar. I’ve read that black teeth were a status symbol and most records of her majesty recount her black teeth.

They even had sewers… open ones for the most part, but they did have them, and we’ll get more into the transit of muck from city to sea when we discuss the Worshipful Company of Plumbers (yea verily). If you want to get ahead of the class, Google “Gong Farmer” some time. Or you could just click that link.

All that being said, they had no idea how sickness happened, how it spread, or what caused it. As the author of my ale book said: “Alewives… would’ve taken your word for it if you told them that invisible sickness demons lived in the water and could only be killed by being boiled alive.” Cleanliness may well have been next to Godliness, but the definition of cleanliness was as flexible and multi-defined in our time period as was the concept of Godliness.

I noted in a previous post that the idea of “They drank ale because water was unsafe” is a popular notion, put forward once more by Dr Cookson in the book I’m using. But it’s a concept that is currently, finally, under fire. The easiest counter-argument is that the claim is flawed at its core for the exact reason she just mentioned: avoiding water and supplanting it with beer would imply more knowledge of disease vectors than the early modern person actually possessed.

Also, the duration and amount of boiling in ale-making is insufficient to actually kill some popular water-borne “sickness demons”.

This article by medievalist Tim O’Neill will do a better job of presenting the counter-argument than What Was the Drink of Choice in Medieval Europe?  He makes a good case for water being the go-to for most Europeans… and yet, in his first sentence implies that the problem is with misinformation on the internet. I’ve been reading the factoid that ale was safer than water and preferred for that reason in history books, including textbooks, since I was a small child. This isn’t a new idea or one of those bits of net-lore that get argued about in the fora of Straight Dope and Snopes.

Anyway, it’s a great article and I’d love to talk to him about it sometime… maybe over a pint.

For whatever reason, it’s indisputable that people drank enormous amounts of ale and beer. Several liters a day by many counts. We’re impressed by these statistics because we think in terms of modern beers, but they got away with it because alcohol levels were so very low in early beers and carbohydrates were incredibly high by modern standards. The recipe I’ve been brewing has a pound and a half of oats in it, for heaven’s sake.

Calorically, it’s a meal in itself.

Academic arguments aside, whether it was because the local water supply was suspect or because it was the early modern equivalent of a protein shake, we can all agree that ale was the lynch pin of the early modern diet.  And whether or not the average medieval schmoe was as dirty as popular imagination would have them be (they weren’t) the sanitation of the modern kitchen is vastly greater than the sanitation of the Alewife’s kitchen.

Did I say “vastly”?  I meant “somewhat”.  As far as you know, I decided to forego sterility for reasons of historical accuracy. Yeah… that’s it.

Part III: My Yeast Can Beat Up Your Yeast

Mistake #3: Sanitation is such a Thing in modern brewing because we have a much better understanding not only of disease vectors, but also we have a much greater knowledge of what yeast is and how it works. Pathogens that cause food poisoning are one thing (and of greater concern in bottling than brewing) there are also pathogens that will just show up to eat your yeast. Also, wild yeast, which exists naturally on almost every surface, can get in the way of or inhibit the operation of cultured yeast, leading to problems, or at least unpredictability, with your brew.

Honestly, can you really sanitize a broom? Or even a wooden spoon (which is what we were using)? The God’s honest truth is this: I forewent sterility in this project because sterility was an unreachable goal. Note that JoNell, quite accurately, said “sanitize” rather than “sterilize”. That’s because outside of a clean room in a science lab, it’s all but impossible to really sterilize anything even in a modern kitchen.
When Janet Winter commented on my Facebook wall that her husband’s foray into homebrewing seemed to be more an exercise in washing dishes than it was in making beer, she put a lovely point on things. I won’t define Godliness for you, but I can tell you that cleanliness looks like soap suds because I am, at the core of my being, a modern man.

Besides, even if you do get something sterile, that stops the moment it makes contact with the air because the air itself is rife with things like wild yeast.
But we’re making beer! Yeast is a Good Thing, though, right?
Yes and no.

Modern ale yeast, “Saccharomyces cerevisiae” is top-fermenting and operates best in warmer temperatures, as opposed to Lager yeast, “saccharomyces pastorianus” which is a “bottom fermenting” yeast which operates over longer periods at cooler temperatures. Top and bottom fermenting is a bit of a misnomer, frankly, and has to do with where the foam shows up as opposed to where the real action is. Both types of yeast are free-ranging, hunting down every scrap of sugar they can get their yeasty teeth into and chomping it down to turn into alcohol and carbon dioxide.

The foam that forms atop a top-fermenting beer is the stuff I was talking about in the baking post, called “barm” and though I was looking too early when JoNell posted that the next day, I knew I was in trouble when I messaged Patrick a few days later and he told me he still didn’t see any barm forming at the top of my ale batch.

My yeast were failing me.

Still, I would have to wait a week for confirmation of my failure.

Special thanks once again to Patrick and JoNell Franz for not only generously offering their kitchen to host the brewing of this oatmeal-soup-which-we-will-agree-to-call-ale-in-order-to-humor-Scott, but also their generosity of spirit and wonderful good humor along the way. Would not have been the same without JoNell’s play-by-play documentation.

Today’s Unsolicited Endorsement: Patrick is a professional Robin Hood (yes, really) as well as the founder and president of Presenters of Living History. JoNell and Patrick bring hands-on history demonstrations into schools and organizations, giving kids a chance to make a tactile connection to history by participating in demonstrations and crafts from the renaissance through the American civil war. Aside from being two of my favorite people on the planet, they do Good Work showing kids that history is NOT BORING. You can find out more about their work at PatFranz.com.