No Plans: When things go wrong in uninteresting ways…

Last weekend was symphony of frustration and failure. I failed to meet every deadline I set for myself and failed to even accomplish most of the tasks on my list, even the relatively simple ones.

The most challenging part of this entire project has been how do I blog about the failures? Not the easily-digestible and funny ones like the Great Beer Experiment, or my struggles with the puzzling geometries of a triangle, or even my head-scratching inability to successfully make a thimble. I’m talking about the daily problemsolving and trial and error that even the simplest task entails because there simply aren’t any plans for… well… any of this. Who out there is selling measured shop drawings for a coopered 16th century beer mug or bookbinding press?

Which sort of explains why I failed so miserably to make a brass thimble.

The internet is great if you’re looking for the inexpensive “lifehack”. With enough epoxy or Gorilla Glue, almost any vessel would hold water. Getting yourself set up for binding books? Heck, threaded rods and lengths of Home Depot framing lumber are all you need to get started. But if you’re looking at hair-thin tolerances and wooden screws moving oak chops — the kind of thing that our ancestors used and collectors snatch off the shelves of antique stores as fast as they appear — you’re on your own.

If this ever gets turned into a book, I swear there’s going to be an entire second volume of just measured shop drawings for everything I’ve built in the past few years because I’d like all of us to stop reinventing the wheel every few years.

Most of what I do is done by examining a sketchy 500 year-old image of the finished product and working backward from there.

Just as a seasoned palate can detect the spices and ingredients that made last night’s soup so tasty, and an experienced cook can then translate that to the cooktop, I build mostly by eye and experience. This approach leans heavily on expertise and knowledge of past projects to understand what I’m looking at and how I would build it if I had to. There are only so may ways to make soup just as there are only so many ways to put two pieces of wood together. (Fewer if you’re looking for the finished joint to be watertight.)

That sounds awesome, but honestly, it makes me a nightmare to collaborate with. Ask the people who showed up to help build a pergola for a renaissance faire set a few years ago.

Me: Okay, we’re going to build a pergola, yea wide by yea tall. (flailing hand gestures) and when we’re finished it will look like a pergola.

People want measurements and to know where to drill holes and stuff. These are things I often don’t know until I have the drill in my hand. Which is hard to do if the drill is in someone else’s hand.

Sometimes I try to sketch things out a head of time, but I usually forget that step. Most projects exist only in my head and dimensions are figured out on the fly based mostly on what lumber I have available. The whole sewing frame was sized to the oak door I had handy. The height was determined by how tall I could make it without tipping over.

It usually works out reasonably well… except when it doesn’t.

Last weekend was one of the latter instances.

This weekend was supposed to be spent disbinding and re-binding a Bible. Taking it apart to see how it works and then putting it back together again. I got the disbinding sorted, assessed the damage that would need to be repaired, made a batch of glue, picked up some repair papers from the local art store, mixed up some glue, and then while everything dried, I went down into the workshop to make the last of the book presses I’d need to complete the project.

Narrator: He would never again see the light of day…

Narrator: Omniscience does that to a person.

This was the third binding press I’d made in as many weeks, so it should have gone smoothly, but I always seem to get into the most trouble when working on something I’ve done at least twice before. The first time, I’m being very careful at each step; the second time, I’m refining what I did the first time; the third time I’m bored with what I’d done twice already so I start to “improve” my design.

To quote the great Dr. Jones, “That’s usually when the ground falls out from underneath your feet.” 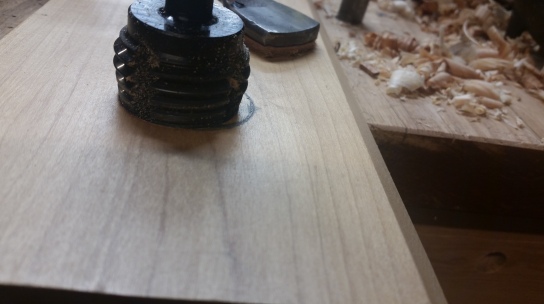 Wooden screws are finicky things. If your threadbox goes on just a hair askew, you can get away with it if the resulting screw is short or if the material it’s going into is thin.

The screw being slightly off-kilter won’t matter because enough threads aren’t engaged to lock things up. But if you have a screw going in even a half degree off square and the material it’s going through is thick enough to notice? Oh, all the wax in the world won’t lubricate that thread through that hole.

And you would not believe how much squeaking and squawking wood is capable of.

It takes a lot of screwing and unscrewing and testing and more cursing than I care to admit to in order to sort out where and how, specifically, you screwed up.

Three days and untold pounds of woodshavings later, I was finally free of the woodshop. It turned out that the answer was boring. Which is to say that I bored about a degree off 90 when going through the active side of the press chop. So the screw was entering the threads at an angle they simply found unacceptable.

So I bored it out and went at it again and finally got things sorted out.

By then I was out of free time, too late to get back to the studio in good order and with good lighting to finish the Bible re-binding. My real life beckoned and my auto-immune disease wandered in, lit up a cigar, and smashed the place up like a Marx Brothers routine.

So it’s been a minute and now we’re back and everything more or less works again, at least until the next time I have to turn a pile of wood into a brass thimble or something, and then I’ll be back to wondering why nothing ever goes right.