Bookbinding Tools I: The sewing frame

Note: This has been rather heavily edited since it was first written. My apologies for going to press before I had all my ducks in a nice, neat line.

My wife observed today that there seems to be a lot of woodworking in bookbinding. Well, did you notice how many woodworking tools there are in Jost Amman‘s image of the bindery? You think all those axes are just for shaping book covers?

Well, yes, of course they are, but… seriously, it’s a lot of woodworking and we’re just at the beginning.

Jost Amman is my muse and my nemesis. Even when he knows what he’s looking at, his images are maddeningly light on details. Unfortunately, he’s so often the only record we have of the tools and practices of a period craft. 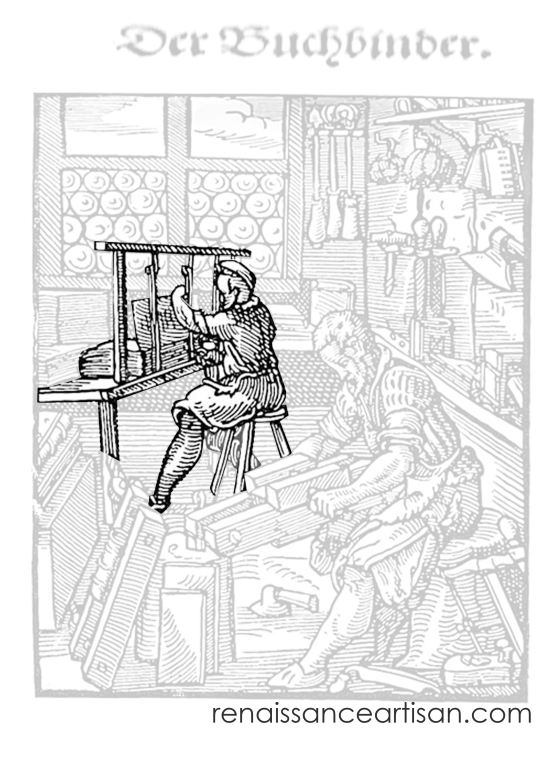 All that being said: the sewer in Amman’s bindery is working at a large, permanent sewing frame which appears to be a permanent part of the table. 16th century German bindings are notoriously tight/inflexible, so I’m guessing the tension adjustment, comes from tightening the cords, which are looped through other cords. It seems that would give them two points of tension. There could be some adjustment in the hooks the cords are affixed to as well, it’s hard to tell. (I’ve seen modern binders at who have threaded hooks hanging from the crossmember of their frame, tensioning with wingnuts.)

Even in my cleaned-up version of the woodcut with the sewing station isolated, it’s easier to see the interconnected loops, but I still can’t see how much they are applying tension to each other. Heck, it could all just be a way to save on expensive alum-tawed leather cords.

Either way, the whole thing looks depressingly immobile and not given to being tucked away in a closet when I’m not using it. Thankfully,  in the mid 16th century, we were gifted the threaded upright. Wooden screws are all over the place in Amman’s woodcuts, so it was only a matter of time before someone sewing a book got tired of tensioning with knots and loops and said “Hey, can I have some of those?” 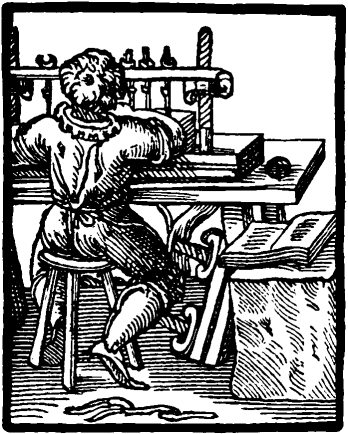 (See edit below for full image and attribution for this more-accurately dated 16th century image).

My guesses about longing glances in the bindery aside, it’s hard to say when/how exactly they evolved. We can only be sure that the threads were added to make tensioning easier because… well… they just do.

Maybe if we’re asked to demonstrate this trade for the public, I’ll come up with a knock-apart sewing frame table like in the Book of Trades, but probably not. For now, we’re going with the threaded-rod version that persists to this day. 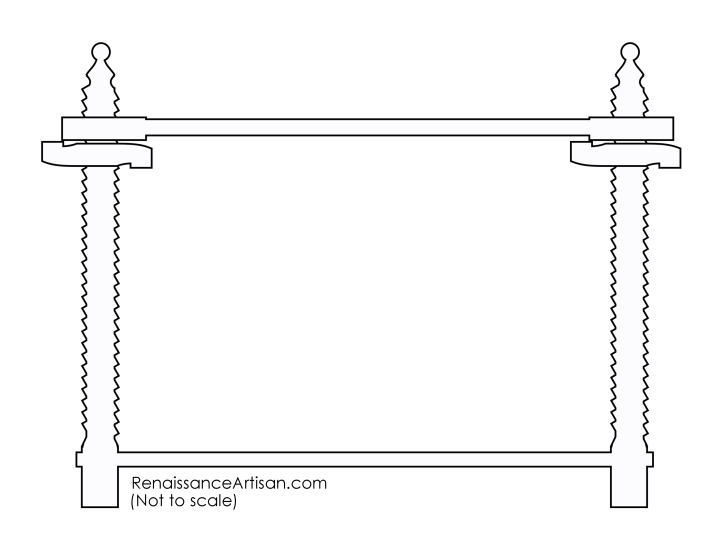 My line drawing doesn’t include dimensions because this design is almost infinitely scalable. I don’t want to dictate sizes because your needs, your space, and the materials you have at hand will vary wildly.

Because I haven’t made one of these before, this is essentially a prototype, so we’re operating under my usual “What I have lying around” aesthetic. Therefore, the whole thing was sized to a nice 22″ x 12″ oak cabinet door I had handy and made a nice base. The threaded uprights are 22″ and cut from poplar because I wanted an easy run through the threading die. The base is 2 ½” off the table it sits on. The bottoms of the uprights form the front legs and there are small turned legs in back. 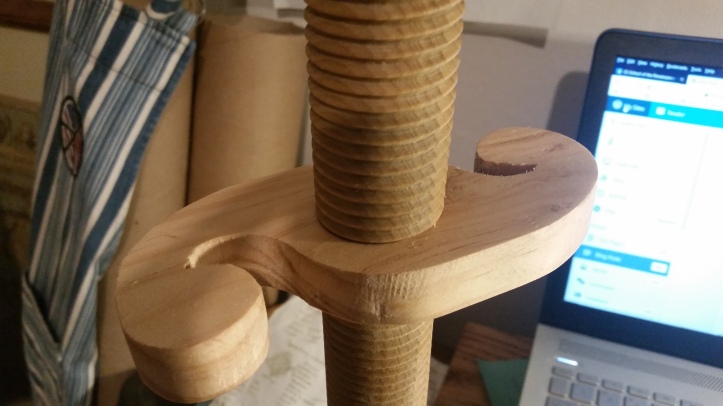 The adjustment nuts are pine (and rather roughly finished, I’m ashamed to say) as is the crossmember. The ‘cyclone’ style nuts were cut to resemble the adjustment nuts on other, more clearly depicted, 16th century presses and sewing frames. 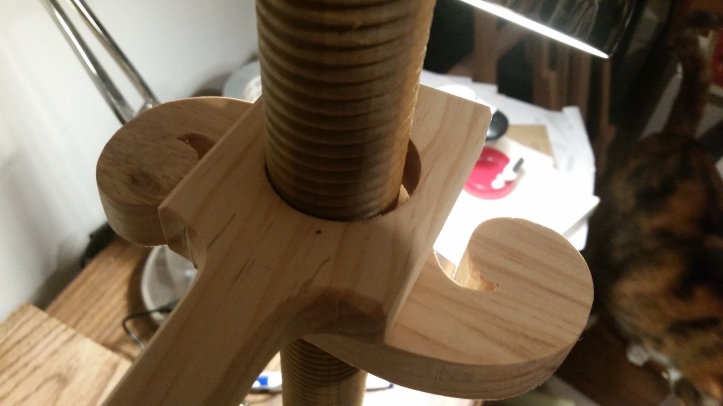 The crossmember sits loose atop the nuts, which will provide tension once the frame is strung. 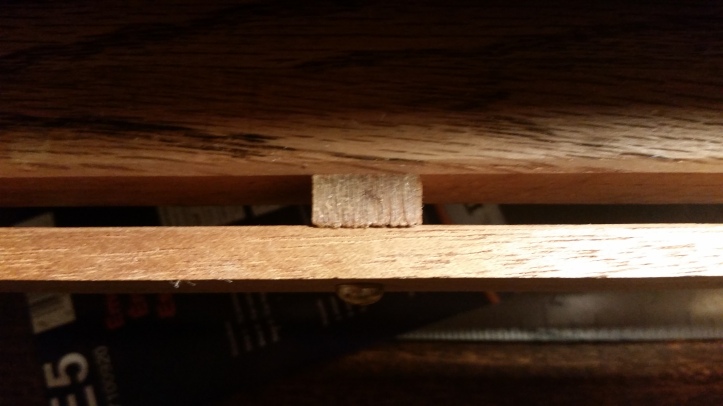 Amman’s image didn’t show how the bottoms of the cords are dealt with, but his images seem to indicate that there was a separate piece of wood across the front, which indicates to me that the cords could pass through and be secured below the sewing surface. That’s how it’s done today, with the bottoms of the cords/tapes secured to keys (or sometimed tape) below the sewing surface. So I left a 1/2″ gap at the front of the bed, which the cords will pass through and lock below the table surface on a wooden or brass key. The screws are temporary while I test how wide I want that gap to be or if I need it to be there at all. 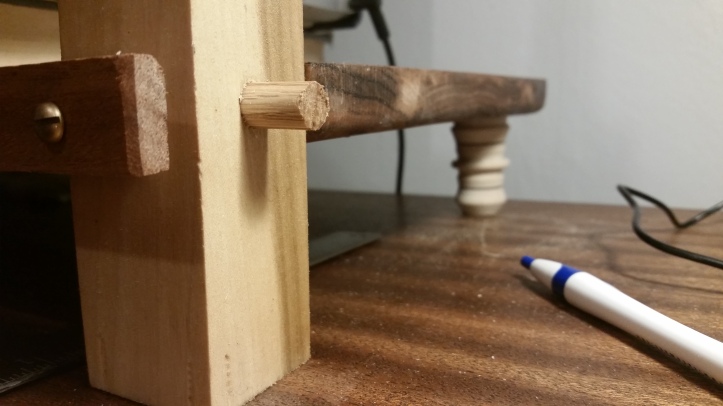 The whole thing is held together with pegs and those three screws so that I can knock it apart and put it away. I’m not sure the peg arrangement will be enough to hold the frame rigid while sewing, so I might need some sort of additional buttressing going forward. I hope not, but we’ll see.

Maybe tomorrow I’ll actually get to use it.

More later, once I sweep up all these wood shavings.

The image showing the back of a book sewer at an adjustable sewing frame wasn’t well sourced in the book I found it in, so I’ve been trying to trace it back to the original source ever since. It turns out that it was cropped from a playing card made by… wait for it… Jost Amman, my old muse/nemesis.

Here’s the full original card, cleaned up so the details could be more easily discerned. 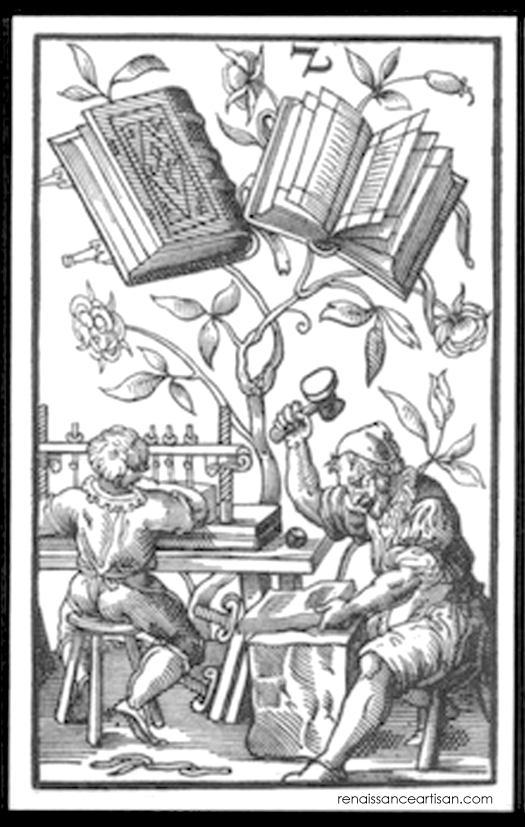 We’ll talk about the guy who is wailing on a book with a giant hammer in a later post. The book-beating thing is fascinating stuff.

Special thanks to Heather of Morgan Donner’s Sewing Party for leading me to these playing cards in the first place, directly resulting in me successfully identifying/dating that vexing image.

I used a 1 1/4 inch threading kit I bought from Lee Valley quite awhile ago. I dont think LV sells them anymore, but they’re still available in various outlets like Garret Wade and Woodcraft.

You can, of course, make your own threadbox and tap from scratch. Roy Underhill has an extensive writeup on how to accomplish this in one of his books as well as on  the PBS website for his show. The YouTube channel “Pask Makes” has a pretty good series of wood threading videos as well.

Bookbinding as a Handcraft by Manly Bannister, Bell Publishing, NY 1981

Image: Woodcut Playing cards by Jost Amman, can be found many places online, but The British Museum has an original set: “An incomplete set with 51 of 52 cards having as suit-marks printers’ dabbers, books, metal beakers and glass goblets.” c.1588 acquisition number 1896,0501.381.1-51