One of the most interesting things, and one of the great mysteries, of the early modern workshop is the way they held their work steady so that they could… well… work on it. Entire books have been written in the attempt to explain how one trade or another put tool to workpiece without it shifting and skittering away from the tool.

In all my research, I can find no record of how the pinner held the bone steady as they filed their pins and/or needles.

Holding the bone between the knees feels too unsteady to me. Early images show pinners at tables, so we used a holdfast from the joiner’s shop, but if I’m honest, that’s probably not how it was done. The holdfast is a very specific piece of kit and would need to be made to order by the local ironmonger. It takes a substantial work surface to lock it in place, and all of those things seem to argue against the destitute pinner who — as commonly depicted — chose their profession based on the cheapness of the materials and tools.

One of the most obvious workholding options is a bit of string… or leather. 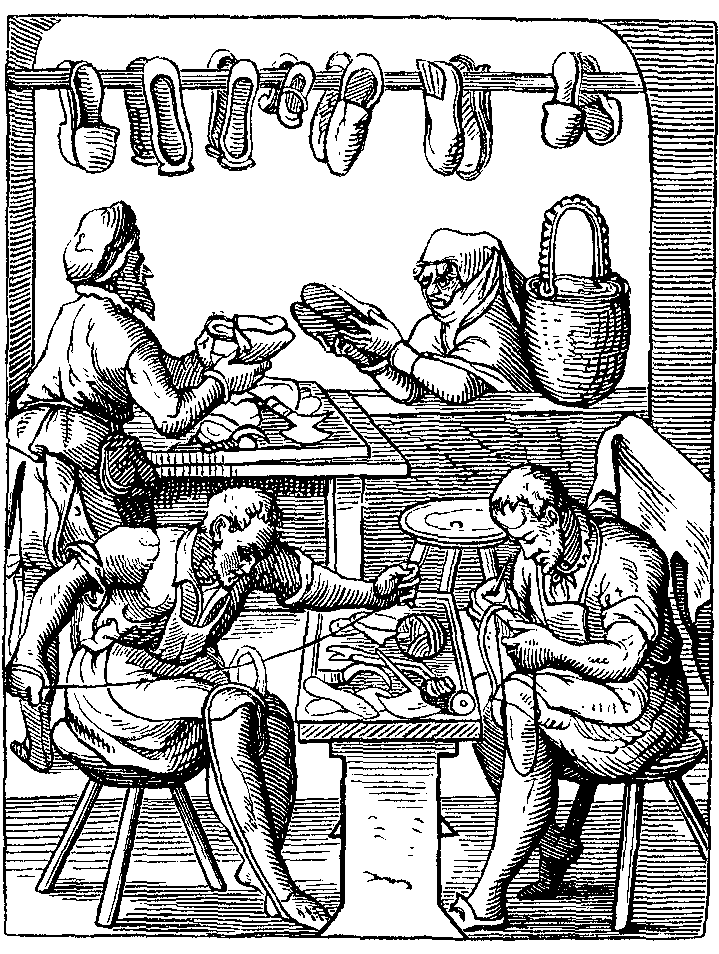 In early depictions of cordwainers (shoemakers) they are frequently shown with a strap that goes over their thigh and down the leg under the heel. You can see it on the leg of the cordwainer on the left of Jost Amman’s woodcut of a cordwainer’s workshop (left).

The strap locks the workpiece in place on their thigh. It is commonly known as a “shoemaker’s stirrup” and it could be made from any piece of cloth or leather strap you found lying around or tore from the hem of your cassock.

Though it’s called a shoemaker’s stirrup, I can find nothing to indicate that it was only and exclusively used by the makers of shoes. If it was protected by guild law as the joiners protected the secrets of the plough plane or the turners their lathe, I cannot find a record. It’s such a simple concept that I suspect any number of workers would have made use of it or something similar.

Mine is relatively fancy and about as long as I am tall: a leather strap, 5/8 inch wide by 6 feet long with a brass spectacle buckle. I made mine out of leather and used a buckle because I wanted maximum adjustment for shoemaking or holding a bone or whatever. I stress that there’s no real need for fancy or even for leather. Any long strap and a sturdy knot would do.

Caveat: In the absence of evidence, I cannot say that this is how they did it; I can only document this to the shoemakers with any reliability. But I would not be surprised to find out they did use a strap of some sort, even if they were just strapping it down to their table or bench.

If this was Mythbusters I’d stamp it “Plausible”. Your mileage may vary, void where prohibited by guild law.