Why am I doing this?  I ponder that a lot. And there are a lot of reasons why I decided to do this and why I’m doing it exactly the way I have chosen to.  Primarily, I think, it’s because I make things.

Stories, gardens, paintings, toys, furniture, clothing, messes, mistakes… it’s all part of the same creative impulse that’s driven me throughout my life. It comes from the frustration with what’s there not living up to what could be there. 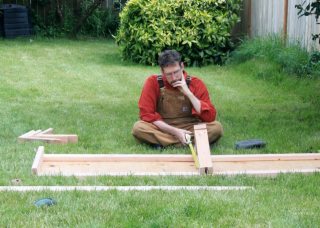 This project is about celebrating the people Who Made All the Things.

When I was a kid, I made many of my own toys.  All of my favorite toy guns came from the crates of miscellaneous junk beneath my grandfather’s work bench, not Toys-R-Us.  This isn’t because we were particularly poor, and it wasn’t because I grew up in 1936 (though it felt like it sometimes). It was because the toys I envisioned in my head were just that much cooler than the ones you could buy at the toy store.

Thankfully, my parents and grandparents encouraged this sort of thing.  At least until I went as far as getting into pounding heated nails into tiny swords for my GI Joes.  Dad drew the line at me becoming an  eight-year-old blacksmith.

Even those toys I did buy or that was given would eventually go under the screwdriver.  All of my favorite GI Joe and Star Wars characters and vehicles were custom amalgamations to suit my own fancy, characters in my own extended story lines.

As an adult, I transferred this into sculpture and artwork, but really these are all extensions of the same brain frequency, the translation of a mental picture into a three-dimensional object.  I’ve made props for renaissance faires and small theatrical productions and science fiction conventions.

This isn’t to toot my own horn.

For one thing, I never got the hang of playing a brass instrument and if I did toot a horn, you wouldn’t want to listen to it. My sister got the lion’s share of musical talent in this family.  This isn’t horn-tooting, it’s about the philosophy of what I’m up to, what I’m about.

This is a project about makers.  It’s about doers.  It’s about pulling the spotlight away from the princes and generals and artists who dominate the history books and shining it on the people in their shadows. I’ve always found that the trouble with teaching or even talking about history is that it keeps boiling down to bold-face names and red letter dates, which are ultimately meaningless: “William the Conqueror defeated King Harold II at the Battle of Hastings in 1066.”

I came out of school with my head packed to the hair follicles with dates and names like this. But I couldn’t have told you what they ate. Or who prepared it. Or how. I could not have told you, beyond the broadest outlines, how their houses were built, or what their daily lives were like.

And it’s just getting worse because history is getting bigger and we’re spending less time learning it. Encouraging evermore the approach that exemplified the teaching of history as I went through school: Invasion! Battle! New king. Red ink, memorize the boldface names, pass the test and move on. How did they bake bread? Who cares! No time! Look at the shiny armor, memorize the battles, we have more facts to memorize tomorrow.

I came to terms with the fact long ago that if I was to get a deeper understanding of how humankind got from there to here, it was up to me to figure it out on my own. Thankfully, we have the reenactors and their groups to help us out. Vast societies have sprung up in recent decades to keep alive the martial arts of Europe, breathe life into the illustrations of the fighting manuals of Germany, Italy, France, and Spain.

I don’t want to denigrate their efforts. There’s some amazing things coming out of their salons, vast tracts of forgotten knowledge reawakened by their scholarship. But strength at arms are not my strengths. One reason I’ve never joined a reenactment society is because I can’t find one that focuses solely upon the homelife of the world that was, a society that doesn’t spin breathlessly around the rehearsal for a half-forgotten war.

I’ve studied the fine art of killing people for king and country and personal honor; now I want to  study the things that kept everyone alive between duels and wars. The people who made the renaissance.

Making things. It’s what fires me up.