How to Make a Turned Stool from a Grape Arbor, Part Three

When last we left our troublesome triangle, we had cut and turned our pieces, ploughed a groove for our seat, chopped and drilled our mortises, assembling the most troublesome parts and creating the superstructure of the piece. We now have a free-standing three-legged, triangular frame, just waiting for a seat and rails to polish things off.

At this point, we are no longer wondering why very few reenactors bother to make one of these for their camp seating. It’s astonishing to me that this form lasted virtually unchanged for 300 years.

Humanity has a hard time letting go of an tradition no matter how annoying it turns out to be.

The seat seems simple enough; it’s just a plank large enough to fit a triangle the size of your stool. (You might have to glue up a wide enough plank.) The edges are beveled with a plan to sit in the grooves when it is assembled.

I broke three of them while planing them.

A light bevel on the back makes the holdfasts’ hold uneasy at best and the worked edges are unsupported as the plane slides across them.

Correct: The batten evenly-distributes the downward pressure of the holdfasts, securing the work piece even though the craftsman is foolishly choosing to work over the void rather than back on the bench like a sane person.

Upshot: The ideal work holding scenario is a fully-supported one.

There’s a lot of paring and planing and fiddling and otherwise mucking about in getting your final fit. The seat should ideally float in the groove just a little bit, allowing for seasonal expansion and contraction without cracking or pushing the joins at the corners apart when the humidity rises.

Medic, bring me a stretcher

To avoid another joint of tenon-through-tenon, the stretchers are placed at different heights. The bore for each stretcher should be just a bit more than the width of its tenon higher than the last to avoid interference.

I created a marking jig to effect this, drilling three holes the size of a finish nail in a scrap piece of wood, each at the desired center point for one of the stretchers. The finish nails I wasn’t using could retract out of the way while I was marking the others. 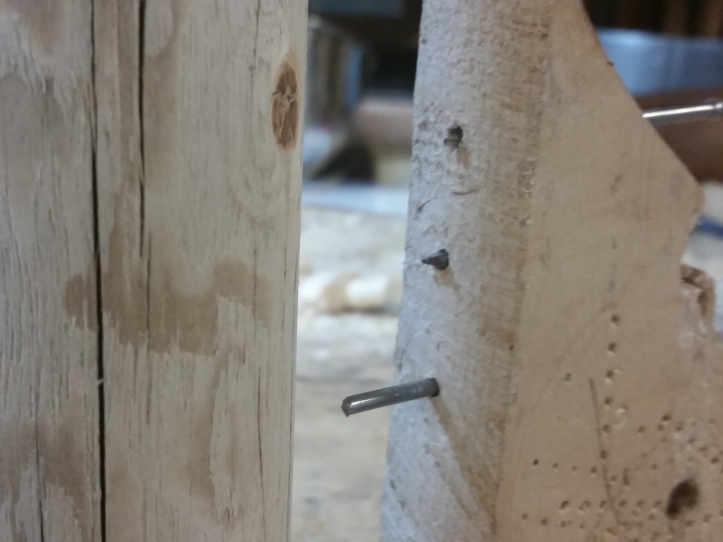 I don’t know how “proper” chairmakers do this, but this was my solution.

I would be lying if I didn’t tell you that by this point, I was tired and annoyed and feeling very modern, so when it came time to drill these holes, I grabbed the DeWalt instead of the brace and bit.

Note that these are not through-holes. The Stretchers stop about half way through the leg, hence the depth stop on the bit in my drill.

Peter Follansbee had Roy Underhill to help him assemble his stool. I had a strap. (It’s not as personable as Roy, but it’s not as prone to cutting itself either, so…) 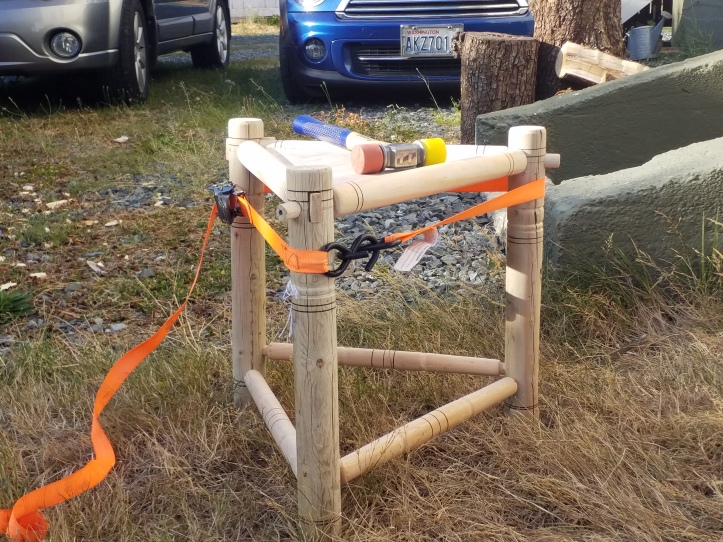 Cut off the protruding tenons and insert wedges 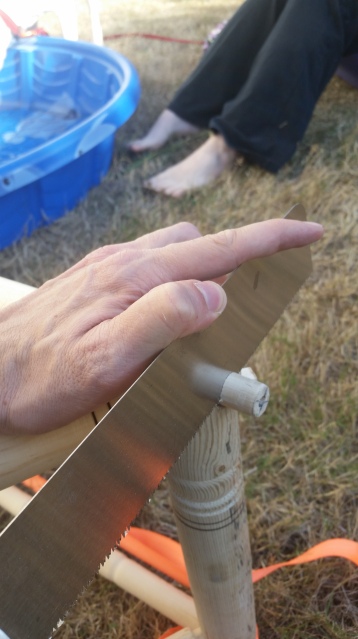 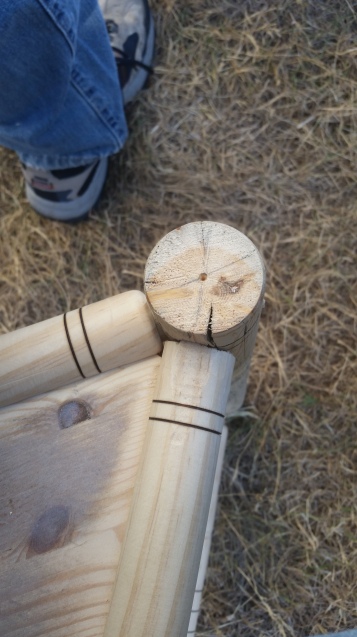 Knock it together, seat the mortises with some wedges, and… well… have a seat. Take a load off, because you’re done.

If you want that added level of rigidity and if you’d like it to look just that much more perfectly period, add some spindles between the stretcher and the rail. Just line up your holes and insert them as you’re assembling, though the strap idea might not work as well since that’s another direction of pressure. Or you could use more straps if you don’t have a mustachioed woodwright handy.

I might knock this apart at some point and add some spindles, or I might just put it off until the next stool. In the meantime, it’s a handy footstool/end table for my office.

See Part One for the full ‘Works Cited’ listing.

Header image: An Inn with Acrobats and a Bagpipe Player by the Brunswick Monogrammist, c.1550 via Wikimedia Commons.