Joy of Sectors II: Revisiting "The Arte & Misterie of Coopering"

You may remember this picture of a persnickety Perkins working the angles on a coopering demonstration. 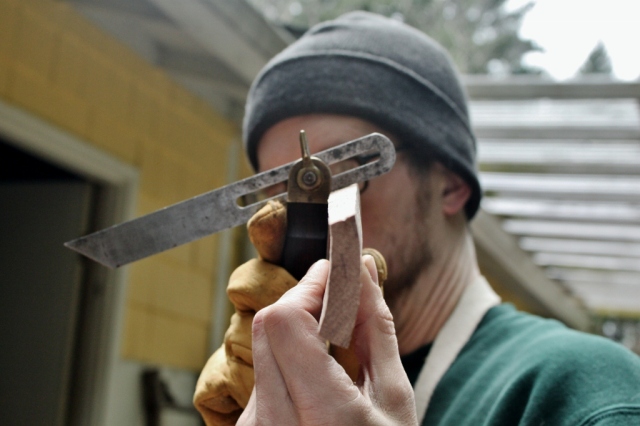 With a bit of math and the able assistance of my consulting engineer, we determined that the eight perfectly-equal staves of my Mary Rose tankard needed to have 67.5 degree bevels so that they would align to form a perfect circle of watertight, oaky goodness. 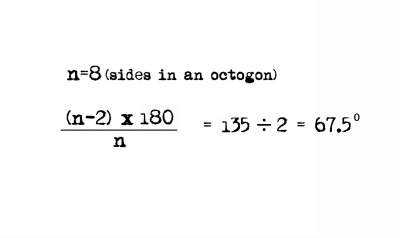 This assumed if you didn’t round off your tankard/bucket/barrel or whathaveyou that you’d have an equilateral polygon. All sides (eight sides in this case) were the same and would be worked with the typically-modern obsession with precision and symmetry. 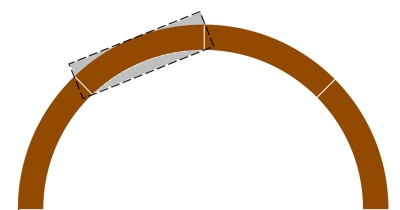 As we discussed yesterday, that wasn’t quite right. Coopers make their staves whatever width their wood allows and it’s not always symmetrical and there aren’t always an even number of staves. This is important since they were cutting wood straight from the log and doing a lot of their shaping with an axe. (Axes are awesome and speed up woodworking considerably, but they’re not really precision instruments.)

All of which throws off my equation a bit. You could still figure it out, of course, but it just got a bit harder.

Part of the problem here is that I tend to think of barrels and tankards as segments of a ring rather than pieces of pie. I’ve been peeling all these apples, so let’s make a pie. 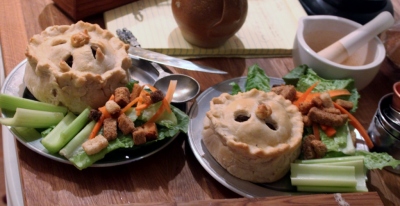 Not a meat pie, you goofball, an apple pie. 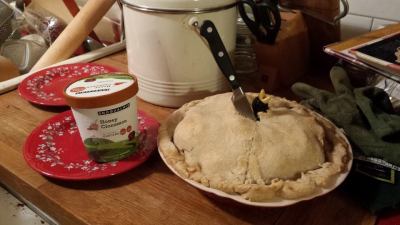 Much better. (The ice cream’s a nice touch, but we won’t be needing it today so I’ll just eat it and get it out of the way…)

Like a period tankard or bucket, the average pie slicing cook isn’t going to make every slice exactly the same size. The piece for the baker is big and the piece for the kids are small. Also Aunt Agnes, who always says she’s on a diet, but takes twice as much ice cream as everyone else. 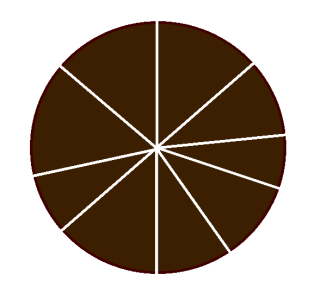 The nice thing about this way of imagining a coopered vessel is that you could (if everyone can hold their forks for a minute) rearrange those pieces any way that you want and — as long as each cut passes through the center — you’d still have a pie the same size as you started with. The pieces would all fit together no matter how you rearranged them in the pie plate.
But with coopering, you’re starting with a pile of uncut sticks and an entirely imaginary pie that you’re trying to craft out of thin air and oak. So how do you do this when you don’t start with a pie?

If you remember, at its simplest form, the sector is two straight pieces of wood hinged at one end. Pretty much exactly like a pair of dividers, except made of wood. 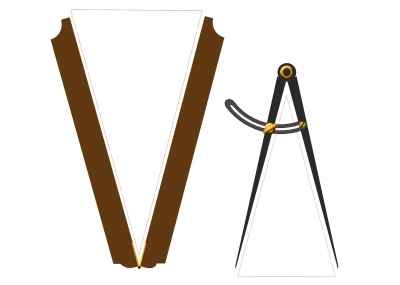 The geometry of the sector is devilishly simple: The two legs are equal, meaning that the legs will form an isosceles triangle. If you place it at the center of your imaginary bucket (or whatever you’re making), it forms an imaginary piece of pie. If you want to make a ten-inch bucket (measured across the bottom) you just mark your sector five inches from the hinge.
That’s the inside radius of your bottom. 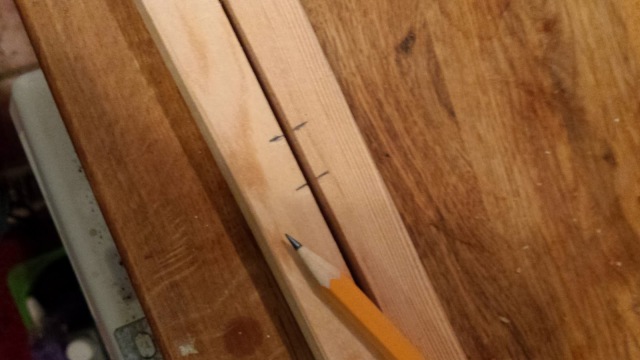 The second mark you see there indicates the desired thickness of the walls of my imaginary bucket.
Now, no matter where the sector crosses the the outer wall of your bucket, or how far apart the the legs of the divider have to be (to accommodate your rough-cut variations in stave width) the legs form the angle that you’re shooting for.
You found your stave bevel without writing a single number on a single piece of paper. 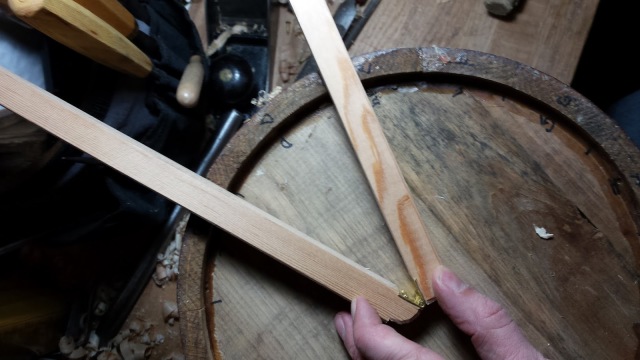 As you can see, this is also helpful if you decide to repair or knock off an existing bucket.

It’s not just a measuring device for finding the angle of your bevel either. It’s also a jig you can use to monitor your progress as you create the bevel on your staves. Hold the bevel up to the stave as you work and align it to your marks as you go.
The angle of the sector will tell you how far you need to lean the stave over as you plane the bevel. When the stave sits snugly in the sector between the marks, you’re golden. 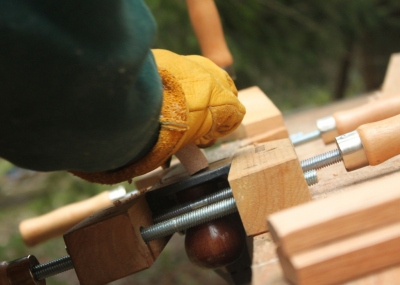 The importance of this cannot be exaggerated for the working cooper. And this is the part that I forgot when I was doing my demonstration.
I almost wish that building that bakery at the Washington Midsummer Renaissance Faire had been the first step in this project rather than happening in the middle. I suspect that I’ve fallen down on most of these projects simply because I’m thinking in terms of one-off bespoke items rather than the economies of production.
The practicing cooper isn’t making one bucket at a time. This isn’t bespoke bucketing on Bond Street, it’s mass production because a cooper (and his apprentices) gotta eat. So if they’re making as many buckets at a time as they can reasonably get away with, there’s no room to be fiddling about with equations and making these exacting symmetries that we’ve become so accustomed to post industrial revolution.
A cooper’s shop is making piles and piles of rough-cut staves and assembling them into a pile of ten-inch buckets and they all have to fit together no matter which bucket they’re getting shoved into. 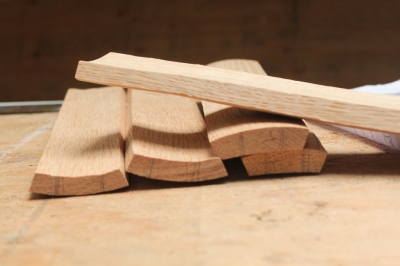 Yesterday I asked where I should stop. I don’t know that I’m going to go back and repeat every experiment and demo that got us this far, but going forward I will certainly be taking a hard look at each of these trades and asking the question that should be obvious: How did they do this fast enough to make a living at it?
Because therein lies the real secret of most of these trades.
Now go eat some pie. You’ve earned it.
-Scott

The “Aha!” moment for this didn’t come from thin air. (They never do, no matter what anyone tells you.) I’ve been reading about sectors recently, mostly using Jim Tolpin’s books and articles so I was in the right mindset when I had the good fortune to catch an episode of Roy Underhill’s “The Woodwright’s Shop” featuring white cooper Norm Pederson who actually demonstrated many of the things that past coopers on that show had previously waved away as “something you learned with experience.”
The episode is not available online anywhere I can find it, but you can download it for $3.99 from Popular Woodworking here: https://videos.popularwoodworking.com/courses/the-woodwrights-shop-s24-ep04-norm-pederson-white-cooperage
Or you can buy the whole season on DVD like I did. I highly recommend it if you have any interest in trying this out yourself with better results than I had on my first outing.
Further watching…
This is not that video, but it’s an excellent demonstration of white cooperage filmed at an outdood event, so the sound isn’t always so great.