Breaking the shackles of time: Books, Writing, and Practical Paleography

“What an astonishing thing a book is. It’s a flat object made from a tree with flexible parts on which are printed lots of funny squiggles. But one glance at it and you’re inside the mind of another person, maybe somebody dead for thousands of years. Across the millennia, an author is speaking clearly and silently inside your head, directly to you. Writing is perhaps the greatest of human inventions, binding together people who never knew each other, citizens of distant epochs. Books break the shackles of time. A book is proof that humans are capable of working magic.”

You knew we’d get to this eventually, right? Before any other label I may affix to myself, I’m a novelist, a writer, a storyteller. The world I see around me isn’t a world of atoms and elements, it’s a world of stories waiting to be told.

And we have unfortunately forgotten more stories than we remember. Because we only remember what was recorded.

The constant struggle with this project isn’t tracking down the right tool or the correct material. The real struggle can be forced into the old Journalistic construction of the W’s: “What do we know? Who recorded it? When did they record it? How did they know it? Why was this saved when all else was lost?” 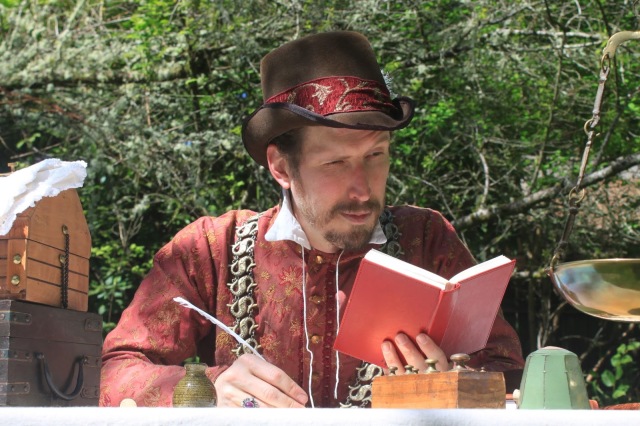 This was almost a “Thoughts from the peeler” post, but then I remembered that there was an actual guild or two involved in the transmission of the Elizabethan Culture from pen to posterity. The “Who” in the above question is primarily focused through the Worshipful Company of Stationers and the Worshipful Company of Parish Clerks. These two groups are responsible for the lion’s share of what we know about our period of study.

As Carl Sagan said at the top of the page, it all boils down to dark squiggles on dead trees (or dead animals in many cases).

All records of births, deaths, and christenings were recorded by the local parish clerk. Books and broadsheets were printed on the presses of the Stationer’s Company.

Yes, I’m working on a letterpress demonstration, but I’m not sure what form that will take. I’ve put some feelers out locally and will probably be working with someone who has already built up the necessary setup for printing with movable type. I’d wager though, that we’re going to be extrapolating from a modern setup.

To keep things within the period constraints we’ve set for ourselves, I’ll be binding a book in a manner that’s correct for our period. There’s an astonishing amount of gear involved in binding, though, so we’ll be doing some preparatory projects in wood and metal just to get us to the starting point for that project.

In the meantime, I am at work preparing quills and teaching myself a new hand.

The preparation of a quill will be the focus for a near-term post, but I’ve demonstrated that craft many times at renaissance faires and events, so I’m not really learning anything new while doing it.

Yes, a new hand. This is where the “practical paleography” comes in. For our purposes, a hand is a method of rendering the alphabet in a culturally-specific way. I’ll write more about this as I go along, but the method of writing used to record important documents in the 16th century was known as the Secretary Hand and it’s damn near illegible to modern eyes.

Translating any manuscript documents from the period into is so time-consuming that the Folger Shakespeare Library and Oxford University have  put out a call for help from the internet to translate more period documents faster than they can alone. Part of my goal with this specific project will be to help in that effort. Not only will this effort increase the number of available records from the time of Shakespeare, you can also contribute to the new edition of the Oxford English dictionary!

You too can help out and learn more about this project at shakespearesworld.org

Anyway, that’s where I am at the moment and what I’m working on during the rainy season which is in full effect hereabouts. My old back injury flared up this week as the result of a minor mishap, so I think I’ll be spending some time indoors anyway, cutting quills and reading about the chemistry of ink and the denaturation of collagen in parchment… nerd heaven.

I thought this was especially appropriate since we kicked off this project with a quote from Anthony Bourdain. As part of a project he’s working on with Balvenie Scotch Whiskey, he paid a visit to Arion Press in San Francisco. They are one of the last of their breed, printing and binding fine books with movable lead type. Their methods are modern by our measure, but very old fashioned and very cool by modern metrics.