Living Elizabethan: All Work and No Play…

The local news and gossip is awash with stories of our local team’s quest to move a small leathern object of possession by hand or foot from one end to the other of a gridded field of dispute against the fervent wishes of their opposite numbers in counter-coloured uniforms who rise up to stop them. It is given me by local lore and custom that Our local sportsmen are better at achieving this endeavor successfully than any other group of combatants similarly accoutered.

Certainly this seems to be the current obsession of townsfolk in every restaurant, bar, party, and workplace that I enter.

Of course I’m being a bit silly, but since I’m not a football fan it all seems a bit silly anyway. (Unless we’re talking about the Stanley Cup, in which case an overwhelming obsession Makes Perfect Sense!) One of the things I feel like I did wrong in putting this project together was overlooking how the Life Elizabethan really worked. 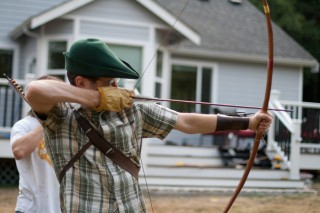 And believe it or not, that includes football… well, sort of.

So today, let’s talk about other things on an Elizabethan’s mind. The things of passing import beyond the immediate pleasure of watching or participating… which is to say games.

Henry VIII was a huge football fan and enjoyed playing, though his game would be as unfamiliar to European football (soccer) fans as it would be to American fans of the gridiron. Though rugby fans would feel right at home.

We’ve talked about Archery, the practice of which was instituted as a matter of law in the centuries preceding Elizabeth’s accession in order to train men for war rather than allow them to be distracted by games like football.

Not that Archery wasn’t considered a sport or didn’t lead to competitions. Around here somewhere, I have a partial court record of a man accused of witchcraft for being too greatly improved at archery, which to me just reeks of a competitor’s jealousy. It led to many games meant to sharpen the instinct and aim of the archer from the benign (swinging targets) to the cruel (shooting at a cat in a bag**).

Thanks to Shakespeare*, we know more about what our Elizabethan townsfolk were up to on a day-to-day basis. Our Elizabethan forebears weren’t necessarily so wrapped up in work they had no time to play. The rise of the artisan class meant upward mobility and with upward mobility came free time. Beyond archery and football, there were also card games and dice, tables (better known these days as backgammon), baseball-like games such as rounders and stool ball, hurling (for our Irish cousins), tennis (another of Henry VIII’s favorites), bowls, badminton…  Also, anywhere there are competitive spirits and things that can be pushed, ridden, or rolled (horses, carts, wheelbarrows, rounds of cheddar…) there will be racing.

They didn’t have a Superbowl or Lord Stanley’s Cup to vie for, but our modern affection for sport is nothing new and it would not be all that surprising to our forebears.

—
* Let’s face it, without The Bard drawing our attention to it, the Elizabethan period would be just another period dimly remembered from history class. Type “Life in Chaucer’s England” into the Amazon search screen. 88 hits on that Amazon search and most of them different editions of the same book or irrelevant to the subject. There were 552 hits on a similar search for Shakespeare’s England almost all of them actually about the life and times of the Glover of Avon.

**“If I do, hang me in a bottle like a cat and shoot
at me; and he that hits me, let him be clapped on
the shoulder, and called Adam.”
-Benedick, Much Ado About Nothing,