Shoemakers and Tailors: Because naked people have little or no influence on society…

Mark Twain said “Clothes make the man. Naked people have little or no influence on society.”  Which brings us to the next parcel of research in our quest. 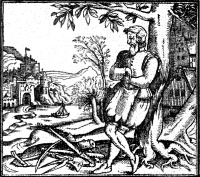 Before this project even began, I was already thinking about what I would wear and how I would make it and whether for the sake of authenticity I needed to wear a costume while I was about my monthly tasks. One year ago today, I was writing the words: “Going into this, I honestly did not give much thought to clothes. I am mostly known as a costumer, of course I was going to be doing most if not all of this garbed in the period manner. As much as possible and a bit more, please.”

At the time, I fully intended to be dressed like the fellow in the engraving at right. This renaissance tradesman has always struck me as the iconic figure of the man of the period, standing ready to make a living by the calluses of his hands. I bought fabric and sat down to make the costume I would wear for each and every aspect of this year’s project. I would put it on whenever I was going to be doing anything for this project.

If you’ve been following along, you’ll already know that this turned out not to be true.

In the end, I decided that unless the clothing either changed the outcome in some manner, or unless the venue called for it, I was going to focus on the nuances of the trade and focus on creating and using the correct tools, wearing the correct and current safety equipment, and not get slowed down each night when I got home by changing into doublet and hose.

As previously noted, I didn’t really try to become a tradesman in any real sense until my recent stint as the baker in the living history encampment of the local renaissance faire. If you’ve stuck around that long and were paying attention to those photos from the faire, I was wearing the costume created to match the bloke in the engraving.

Before I started this project about half the people who knew my work knew me primarily as a costumer. (The other half of my world thought of me only as an author; this is the first time I’ve made any effort to combine the two disparate halves of my life.)  Because I’ve been a costumer for going on twenty years, the Worshipful Company of Merchant Taylors (Tailors) seems a bit of a dawdle. Much as could be said for the Joiners and Carpenters.

This blog is not the place for dawdling.

Because costuming is something I’m already known for, “learning to sew” would ring just as false as pretending I’m learning joinery. (Google tells me that fully half of you got here by following the link on Garb for Guys, my costuming blog which has featured a good deal of my carpentry as well.) Even were that not the case, it doesn’t matter because I’m not here to lie to you regardless.

Really, in the current bundle of projects, shoemaking is the only area where I know nothing going in, so at least there should be plenty of “Scottie is an idiot” moments for your amusement.

How will this work?

The Joiners, the Merchant Taylors, and the Cordwainers will be concurrent projects.  Remember when I said I had a plan to stack projects in a logical fashion? This is how it begins.

At the moment, I’m thinking a ground-up and skin-out demonstration of costume taken from around 1570 or so; the mid-point of Elizabeth’s reign is a nice place to work. I’ve already been making enquiries in knowledgeable places for information on Elizabethan underwear (which is not a Google search term you want to use lightly; just trust me on this one). Meanwhile, I’ll make some shoe lasts and knock out a pair of shoes (he said lightly as if the idea didn’t scare him) and follow that with the drafting and execution of a pattern for men’s and women’s clothing from period sources and made from as close to period materials as I can reasonably acquire.

There’s a surprising amount of woodworking involved in all of these projects, most especially hat-blocking and last making. Meanwhile, I shall also be finishing my joiner’s toolbox and making a reproduction of an item of Elizabethan furniture yet-to-be-determined. Probably some sort of chair.

Joinery, sewing, and shoemaking is all work that must be done entirely by hand and it will probably continue and finish by late November if not early December. Updates will be posted as they warrant. These projects will be concurrent with and inform many of the other projects that will be taking place between now and the end of the year.

It’s the ninth month of what I’d intended to be a 12-month project, so this is how things are starting to shape up going into the home stretch.