Haberdashers, cappers, and the history of the stocking cap

“Your majesty says very true: if your majestie is remembered of it, the Welshmen did good service in a garden where leeks did grow, wearing leeks in their Monmouth caps; which, your majesty knows, to this hour is an honourable badge of the service; and I do believe your majesty takes no scorn to wear the leek upon Saint Davy’s day.”
– William Shakespeare
Henry V

I suppose that I am a few days late for St Davy’s day, that festival of Monmouth caps (and caps of every sort) festooned with leeks across the length and breadth of Wales.  The reason Shakespeare has Fluellen so jazzed to be speaking with the king about allium-adorned headgear is that King Harry was a man of Wales himself, born in Monmouth in the Year of Our Lord 1386. 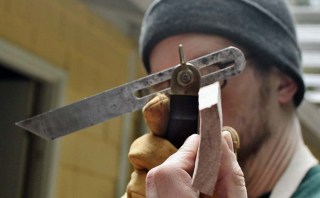 But this isn’t a tale about leeks. This is about a cap born of that same fertile corner of the Sceptered Isle, or at least named for it. The Monmouth Cap is nearly alone among Elizabethan headwear insomuch as you could walk down the street wearing one and no one would look at you twice. To the modern eye, it would seem, for all intents and purposes, to be a sort of wool watch cap not unlike the ones you see me wearing in a lot of photos.

Though I’m not above wearing a fedora if it’s sunny and I need to shade my eyes, stocking caps (as my dad called them) are hands-down my favorite sort of cap for woodworking outside in the cold and damp of my Western Washington home. This is part of why I decided to make one as my first real knitting project.

There are as many patterns for Monmouth Caps as there are knitters trying to produce them. If you go looking on Ravelry, you will find any number of them on display.  The one I’m going is distilled from many of those projects, but mostly one featured onthe website of Jennifer Carlson.

I’m a big fan of the website maintained by Jennifer and Marc Carlson and will be referring you to their fine resources on diverse topics ranging from shoemaking to hornwork to medieval stitches. They are a font of knowledge and generous with sharing it all, almost to a fault.

The reason we’re making a cap is to tie off the last of the Haberdasher’s Company by discussing the duality that exists to this day.

Walk into famed Seattle haberdashery Byrnie Utz and you will get the impression that haberdasher = hatseller. And in the United States for the most part, that is true. Sometimes you will find assorted men’s fashions as well, but always, always, always there will be hats.

(Note: Normally I would link to them, but I can’t because they’re so old school they don’t have a website or even a social media presence. If you want to see it, you just have to make the trip.)

As we’ve already discussed, historically, the haberdasher was a seller of small household goods and sewing notions. Which is not to make them seem small themselves, they rank eighth in precedence on the great roll of the City of London’s livery companies and have been, at times, enormously powerful. Nevertheless, they were mainly the merchants of ribbons, pins, beads, buttons, purses, thread, combs, toys, gloves, and even sometimes household goods and even cutlery.

Almost a general store, to put it in American frontier terms.

They overlapped the Mercer’s Company on many fronts and it’s often said that they were spun off from that fraternity, though their own official history makes no mention of it. Like the Mercers, though, they were the retailers for many other trades, least among them the humble Pinners and perhaps greatest among them the Pewterers and Cutlers.

There are many theories on the history of the word ‘haberdasher’, and if I can find my magnifier, I’ll quote some of them at you from my copy of the Oxford English Dictionary, but the one that I think rings truest is handily online. “Anglo-French hapertas ‘small wares‘”.

In 1502, right at the start of the 16th century, the Cappers Guild either joined with or was absorbed by the Haberdashers, but they never completely soaked in. As a result there came about two schools of haberdashery. On the one hand we had sellers of small household wares and on the other were the hat emporia that I so greatly enjoy today.

Tonight, we sleep. Tomorrow, we knit!