They lurk in the corners of almost every painting and drawing depicting a scholar, saint, merchant, or other person who wants to look scholarly, saintly, or… um… merchanty, I suppose. I’m talking about pounce pots, and they are actually a bit of a mystery.

We’ll get into the mystery of pounce in another post; today, we’re just going to make one.

Funny how they all glow red like that. Huh… weird.

While I admit that it’s possible that some of these are actually ceramic or perhaps tarnised brass, it looks like wood to me, so we’re going to roll with it.

Now, if you did this the way I did, you’d start out by finding the biggest, orneriest, most seasoned piece of cherry you can get your hands on. If you’re smarter than I was, you would grab a piece of green fruitwood and turn it out before the wood dries out. 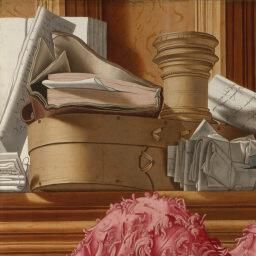 Decoration was decided based on the decoration depicted in several paintings of pounce pots and other turned items which might be pounce pots such as the one to the right.

Which I forgot to feed to the Photoshop monster to make it glow red. Oh, bother.

Almost all of the examples I could find made of what might be wood included this simple beads and shaping. The burned rings were inspired by the black rings on the bottom of the three glowy images above.

The first turn at this pounce pot reflects an inaccurate understanding of a the subtler shaping of the dish at the top. I gave then perforated top a slight dome shape based on a couple of wooden 18th and 19th century pounce pots I found for sale on eBay.

Though I was able to clear the dish of pounce through the outer ring of perforations, it wasn’t an easy process, and upon closer examination of paintings it appears that the period item was dished rather than domed. That makes perfect sense and seems obvious in retrospect. The thinness of the material at the top of the dome would impede dishing of this version, so this is a change I’ll make in the next pass.

This time, I’m taking the easier and more period-correct approach of using a piece of green cherry rather than that hard seasoned stuff. Green wood is wood that is pretty much straight from the tree and retains the natural moisture of the living wood before someone sticks it in a kiln to dry it out.

This time, I’m going to give the turning a more dished aspect to the top saucer section to better facilitate pounce recovery.

Back to the drawing board, in other words.

It sorta looks like I’m designing some sort of weird steampunk reactor. Oh well, I’m probably already on all the Lists with my search history…

The reason to use seasoned wood is that it’s fairly dimensionally stable. It also causes a lot of swearing when it’s as dense and hard as that cherry I used for my first pass at this.

I think the Bible says something like “Whom God loveth, he chasteneth; whom God is annoyed with, he asketh to bore into the end grain of seasoned cherry…” or something like that. 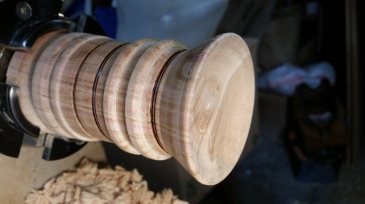 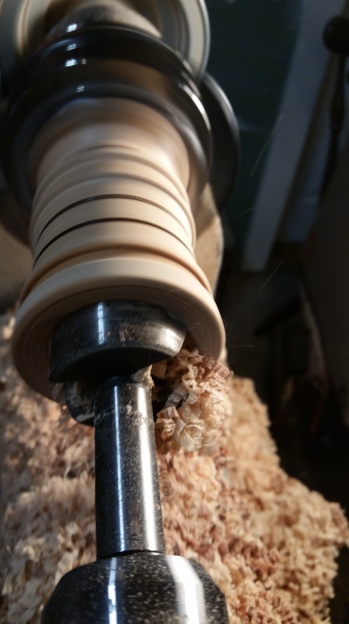 This is a bit of fruitwood that I hacked out of one of the logs on my woodpile. A bunch of cherry limbs and a whole plum tree came down in a storm about 6 months ago, so its a little drier than the really green stuff.

The issue is that I don’t honestly know how this green cylinder is going to dry. I’m new at greenwood turning and it is entirely possible that it will deform and/or crack as it dries and the wood fibers contract with the moisture loss. I guess we’ll see how it goes.

The dished top looks like it would be a lot better for capturing the pounce when it’s poured off the page and gather it back into the pot. 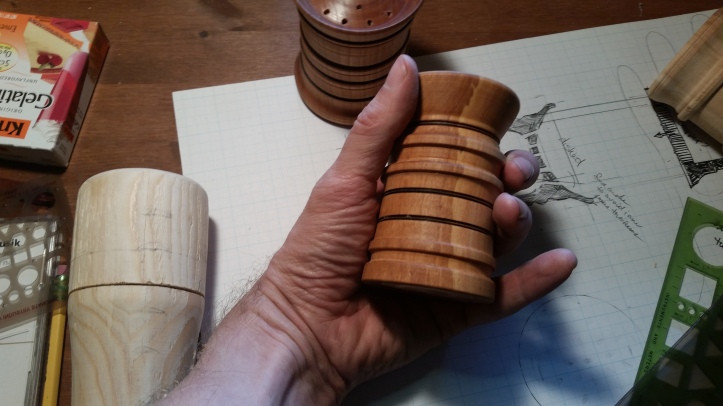 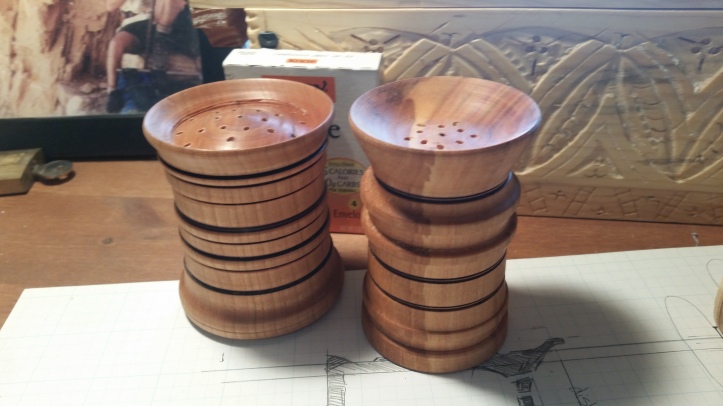 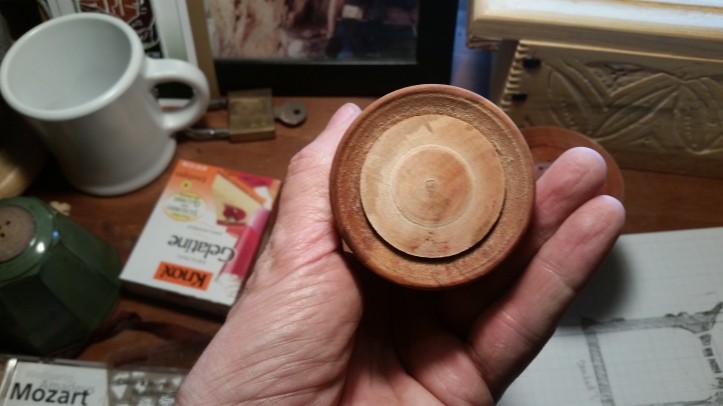