For the record: I absolutely love living in Washington. Seriously, I was wearing a jacket last weekend while my kin in eastern climes were melting. Back home, from June through September is as hot and humid as a giant’s armpit. The one thing I do miss, however, are the thick stands of broad leaf hardwoods. My childhood was spent throwing green walnuts at each other and stuffing our pockets full of acorns like a pack of compulsive squirrels.

I know of exactly one walnut tree in the entire area (there’s probably more, but I can only vouch for one of them) and there’s but a single variety of oak that is native to the Pacific Northwest, the Garry Oak (quercus garryana).

This makes period-accurate woodworking from riven boards difficult, since I don’t happen upon fresh, wet oaken logs very often if at all. That’s bad enough, but it also cuts me off from the all-important gall wasps (cynipidae) which lays its eggs in the leaf buds of young oaks, inciting the tree to encapsulate the parasite with a bubble of acidic tissue known as a gall. The tannins derived from oak galls — along with ferrous sulphate and a touch of gum arabic — are the ingredient in early inks.

So I was pleasantly surprised this morning when I was out walking my dog and discovered a stand of young Garry oaks, positively brimming with wasp galls. 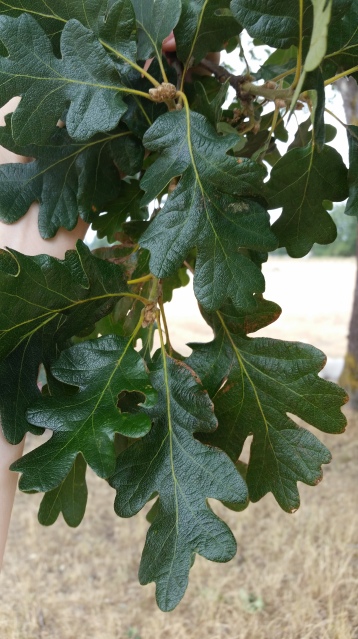 I did not in a million years expect to see these in Western Washington. Even though we have one native species of oak, it is very narrowly distributed between the Cascades and the ocean, and they’re not exactly thick on the ground. The idea that an insect entirely dependent on oak trees to reproduce would be here seemed unlikely at the best of times.

I took a sample and marked the location, planning to keep an eye on these galls as they develop. In the meantime, I think the Worshipful Company of Parish Clerks needs some ink, don’t you?