In Search of a Haystack: Pin Making Part II

As you know, we had a power outage that was compounded by power issues in the house proper that kept us mostly without power until around 3:00 pm today. Which meant that I would have to adhere rather more closely to my pledge for period methods than even I anticipated. For instance, when I was making the die for cold-forging the heads of the pins, I had to haul out the eggbeater drill I inherited from my dad. (I’d have used a bow drill but I don’t have one.)
Fate is a big fan of dramatic irony.
Anyway: Part II of our ongoing quest to build the ultimate angel disco…
The bone, as it turns out is invaluable in this effort. Whether or not it needs to be bone is an open question. Now that I’ve done this, I can imagine why the Tudor pinners used bones. They were cheap and plentiful, they are incredibly dense, and plastic hadn’t been invented yet. Antler or horn would’ve worked, but horn had other more valuable uses and antler came from deer, access to which were controlled by the nobility.
These days, if you want to do this, you could use just about anything dense enough to resist the teeth of the files. 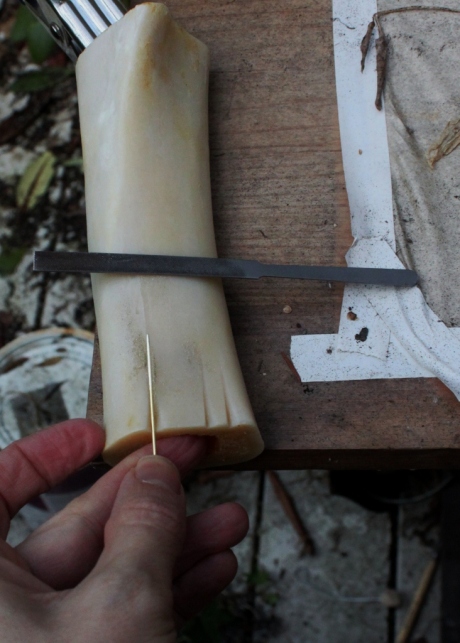 The wire sits in the grooves that I carved into the bone. The grooves are angled between 10 and 20 degrees. The wire sits at that angle and you run a fine file along as you roll it with your fingers, creating a nice round taper as you feed it into the teeth of the file.

It’s easier to do than it is to explain. In short order, with a nice, sharp file, you can make an astonishingly sharp pin.

In the episode of “Worst Jobs In History: The Tudor Age” that showed Bodger Hodgeson and his crew making pins, they flatten the top a bit to give you something to drag. Then, using a pliers, you twist a three rounds of softer brass wire round the shaft, tin it, and then cold-forge it between a die and a stamp.

In Bodger’s pin making shop, they seem to be making springs and cutting them into bits of three turns each. I’m not mass-producing them at this point, so I just wrapped it around.

I made my anvil and stamp by drilling impressions into a couple of enormous bold heads that I utterly failed to take pictures of. Here’s the general idea illustrated, though. Probably better than any picture could show.

Below is the first pin I made, I used some lead-free solder as Bodger showed (he’s using tin, but I didn’t have a forge fire laid to melt tin, so I used solder). I think tin will work better on many levels because it’s so much more malleable than solder can be.

The second pin I made used considerably less solder, really just enough to fix the wire twist in place.

Summaries and “What I learned” will be posted later this week. It’s been a crazy weekend and I hear friends playing games in the next room, so I must away to join in the fun.